Intray
Get it off your mind

Just write it down

Have you heard that all you need to do to get things of your mind, is to systematically write them down? Try it out with intray!

Intray offers a no-nonsense web interface to write down your thoughts and ideas anywhere you go, and easily process them. It is faster, cleaner and leaner than any of its alternatives, while exposing an elegant API and including a CLI and an android app.

Has one of the following scenarios ever happened to you?

Intray is specifically built to have the lowest friction of all similar tools.

Intray is entirely open-source. The source can be found on Github.

Every interaction with Intray is available via the intray API. The API allows to integrate intray seamlessly with complex systems to optimise your workflow. From a "Getting things done"-style tickler system which drops items into your intray whenever you want to automated item generation upon receiving emails from certain people, everything is possible.

You can vote on the feature roadmap Roadmap vote .

Get Started
Subscription
1 CHF
per month

Items represent thoughts you have and want to get out of your head. The purpose is to not think about the ideas anymore between when you write them down and when you process them. During processing, you take the items out of the intray and think about what you want to do with each idea. After that, you delete the item from the intray. Allowing to modify items would only allow you to make yourself less efficient.

Only being able to view one item at a time forces you to process items one by one without skipping any. This is a proven improvement to your processing speed.

No. It is like a box which contains arbitrary thoughts you want to get out of your head. These thoughts still require processing, as opposed to todo items.

There will never be ads on Intray.

Yes, intray is free software, so anyone can host an Intray server themselves. The code is available on Github.

Intray is currently not available on Iphone. If you are interested in writing an Iphone application, please contact us .

Notes and intray Items serve a fundamentally different purpose. Intray items are meant to be short term, ephemeral and for prosessing. Notes have an indeterminate life-time and do not lend themselves well to processing. Intray incorporates the best-practices for processing and is not cluttered by unnecessary features. Moreover, Intray items will persist beyond eventual damage to your phone. This is not the case for all notes apps.

Intray has been designed with your ease of mind and efficiency in mind. For example, the processing does not allow you to see more than one item at a time, which is a proven strategy to improve your processing efficiency.

Intray allows you to use a web interface, e.g. through your phone, as well as a command line interface. This combination makes intray more efficient to use.

Intray was built specifically to act as the first part in a GTD process. Use it as the "In basket" in the following flowchart. 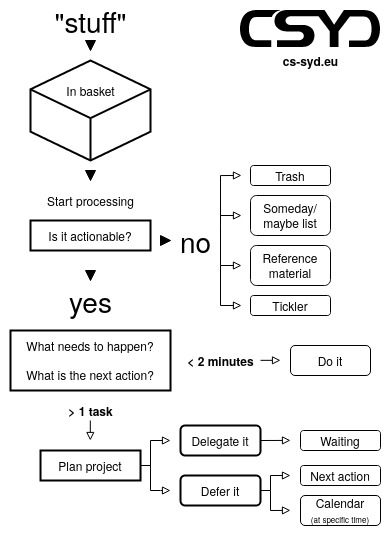 Intray is a CS SYD Product.

Self-management training which includes Intray is available via CS SYD .

For questions and feedback, feel free to contact us .